External link, opens in new window. is the man behind the original idea for the TV series Our Time Is Now (Vår tid är nu)?

External link, opens in new window. in central Halmstad in the 1990s. It was here that he found inspiration for parts of the series. But Our Time is Now

External link, opens in new window. is about another time, another place and another family.

Helga Löwander, played by Suzanne Reuter, is referred to as “The aunt in the attic” in the Swedish TV series Our Time is Now

External link, opens in new window. . This nickname is based on a true story. In the series she lives on top floor of Djurgårdskällaren in Stockholm, although “The aunt in the attic” actually lived in Hotel Mårtenson in Halmstad. Her name was Greta Gruber, and she was the widow of the man who started Hotel Mårtenson. He died in 1969. In his will, he wrote that Greta should be allowed to live on the top floor for as long as she lived and that she should receive her meals free from the hotel. 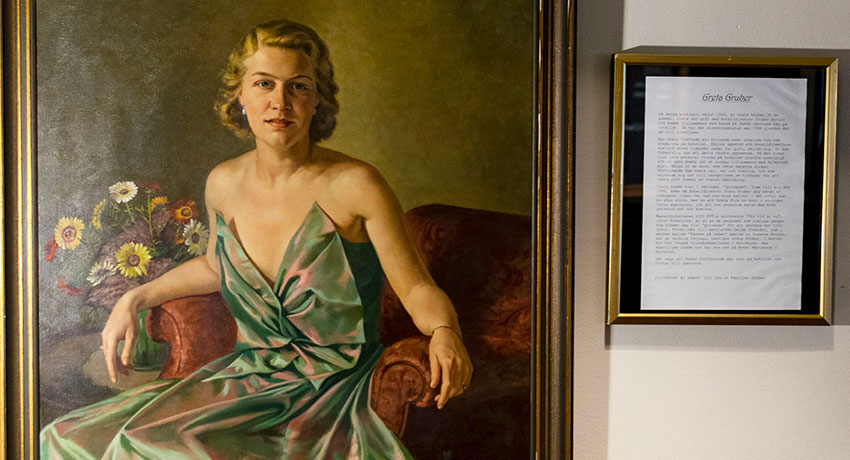 Works from 1945 by Greta Gruber. The painting hangs at Hotell Mårtenson and was donated to the hotel by the Gruber family.

Greta Gruber – The aunt in the attic

The 5th floor was built in the early part of the 20th century to serve as a residence for the manager and it was only converted into hotel rooms in 1996. The last person to live on this floor was Greta Gruber. In the past, Greta had worked as an maid at the hotel, and took a fancy to hotel manager Gruber. This feeling was mutual. When the marriage between Mr and Mrs Gruber came to an end, Greta moved into the hotel in the manager’s residence and became a “fine lady”.

From having been a maid, at a time when she wasn’t even allowed to be in the hotel outside of working hours, Greta now sat in the dining room and ate dinner with the portly loner. This was a major scandal, and her old colleagues spoke very badly about her. However, many others describe what a wonderful little lady she was: sweet and pleasant.

On Tuesdays, in particular, Greta used to hurry down to the reception to pick up her copy of Svensk Damtidning, the highlight of the week. Frank Gruber must have been extremely skilled at drawing up contracts because, despite the fact that there had been many different owners since his time, Greta stayed there until her death in 1996. Initially, the agreement also meant that Greta received food every day. In later years, however, it only included a crate of mineral water a week. And in the end it didn’t include anything at all, probably due to tax reasons.

Many of the former workforce have stated that, in its way, it was charming to have Greta living in the hotel. However, it did cause problems from time to time. At Christmas in years gone by, when the hotel was closed, she obviously still wanted to go in and out as usual. However, she was afraid to walk alone in the hotel’s dark corridors, which gave rise to certain problems. Instead of having a member of staff working right through Christmas, the matter was resolved by someone coming to help her in and out when necessary. Keeping the hotel open just for little Greta was not financially justifiable.

When Greta died, Nordens Kvalitetsauktioner came and collected her furniture and the floor was converted into six hotel rooms. It is said that Greta still walks around the hotel and looks in on the guests, and many of the staff claim to have seen her...

Share
The page was last updated: 10 October 2022
Send us your comments