Halmstad's beautiful rhododendron park can be found at Tjuvahålan along Prins Bertil's trail in Tylösand. The surroundings of the park are lovely all year round, but don't miss visiting it during the end of May and the beginning of June when it is in full bloom.

The rhododendrons’ vibrant colours and mighty bushes give a lovely Mediterranean feel. Here, in late spring, you will experience a brilliant symphony of colour for both eye and soul. In the rhododendron park there are five different types of park rhododendron. Most are purple but you will also find white, pink and red elements. In the unique park there are also a number of cherry trees, some 40 katsura, birches and other lovely trees. When the rhododendron bushes erupt into bloom in late spring, they create a fabulous place and attract many visitors. 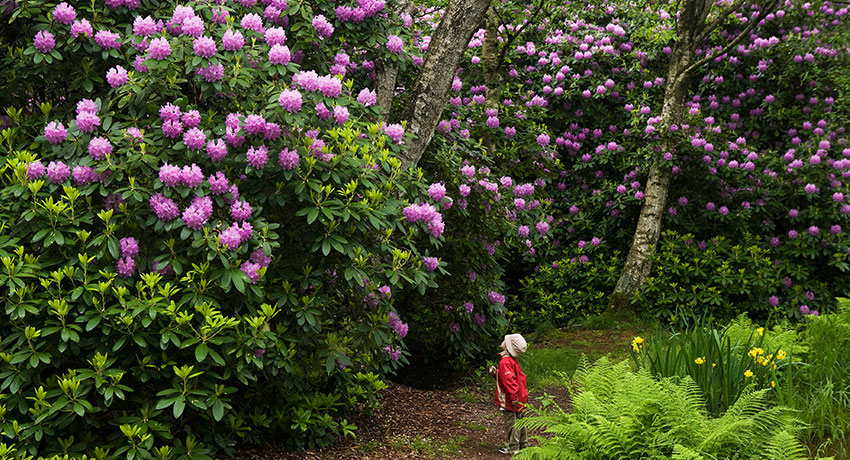 A park with history

The rhododendron park has an interesting history behind it and the park's origins stretch far back. In 1933, unemployment among young people in the country was high and the Riksdag decided to make an attempt at voluntary employment. During the summer, the Unemployment Committee in Halmstad organised a camp in Tylösand where young men had to drain and build a park in the birch-covered little valley at Tyludden. The plans were provided by city architect Fredrik Wetterqvist and city gardener Gunnar Svensson. Over two months, 30 young people worked on the project that ultimately resulted in the rhododendron park.

In 2013 and 2014, rhododendron park was extensively restored and beautified. The result included replaced tables and benches, new surfacing of paths and planting of new plants. The path from the car park is disabled-friendly and suitable for visitors with a wheelchair, walker or push-chair.

More nature and the outdoor life