A walk through town can offer you an off-the-wall art experience. Halmstad has been investing in street art over the last few years, and the artworks are delightful and well worth contemplating.

It all started in 2013 with an acclaimed painting by Pärra Andreasson, Carolina Falkholt and 22 other graffiti artists at Söndrumsskolan. Since then, art has been created annually on walls around the city. We will be presenting our five favourites.

At the bottom of the page is a map showing the locations of our five favourites.

The artwork Pi appeared on a façade opposite the city library over a couple of days in the autumn of 2013. The work was created when artist Carolina Falkholt

External link, opens in new window. participated in an exhibition at Halmstads Konsthall and she was invited to create a new public artwork as part of the artistic design at the newly built Söndrumsskolan.

The hand gesture portrayed in the artwork can be interpreted as a sign of blessing, speaking, or a show of hands, but the artist drew inspiration from Swedish sign language, where Pi is a sign of emphasis, such as in “I really like graffiti”. Carolina Falkholt is one of Sweden’s most established graffiti artists. She has had several solo exhibitions and her works have been shown in museum collections.

Another work of art created through the West Coast Walls project is the mural titled The Balance. The painting was created by Chinese artist Sheep Chen,

External link, opens in new window. who draws his inspiration from his homeland’s traditional culture. Yin and yang is an important concept in Chinese philosophy and symbolises dualism. By balancing two opposite or contrary forces, harmony can be achieved. Chen has offered an interpretation of how difficult this balance can be to master, through a design that brings to mind the world of fairy tales. The painting can be found on a façade on Norra vägen, opposite Norre Port.

The work Scaniceratops by Fanakapan

External link, opens in new window. hails from England and, after his art studies, focused on street art and its forms of expression. Since 2010, his work has focused on helium balloons and exploring the light, shadows and reflections on the chromed surface. The result is an almost tangible 3D effect.

The project called West Coast Walls was run in 2018, and Halmstad received several new murals, one of which was Scaniceratops by Fanakapan. On Skepparegatan he chose to paint a dinosaur, which, with its universal and playful expression, reminds us of humanity’s time and place on Earth. The dinosaur depicted in the painting is inspired by a Scaniceratops, a species said to have lived in southern Sweden about 100 million years ago. 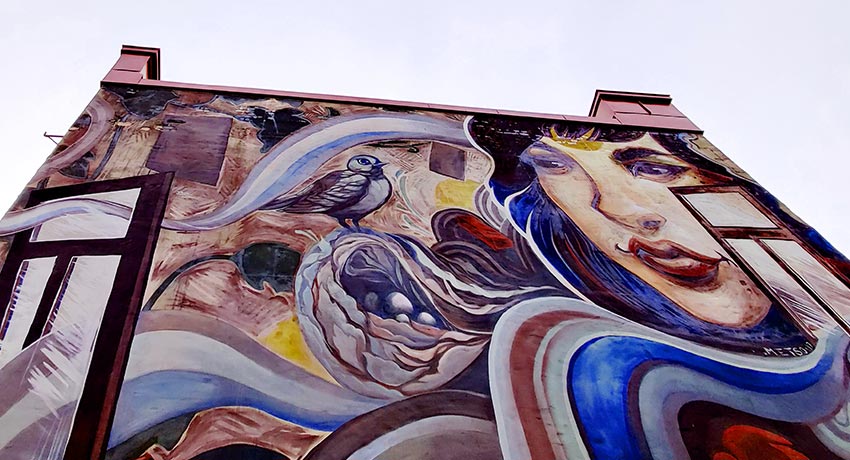 On Stenvinkelsgatan in central Halmstad you will find Elina Metso’s

External link, opens in new window. façade mural, painted in 2017. Metso is an illustrator at heart, but in recent years has turned her focus towards different forms of street art and has participated in several of Sweden’s major street art festivals.

For her artwork in Halmstad, Metso drew inspiration from the colours and details of the farmhouse courtyard. The subject portrays two windows between which are soft, abstract, waveform shapes and a number of floating bricks. The mural also contains a portrait with a bird alongside, which is perched on an abstract, floral-like bird nest. A well-hidden cat sits on one of the windows, while on the left side of the work silhouettes of the ivy from the wall behind can be seen. At the bottom right is a flower arrangement that could be poppies, roses and rosehips. 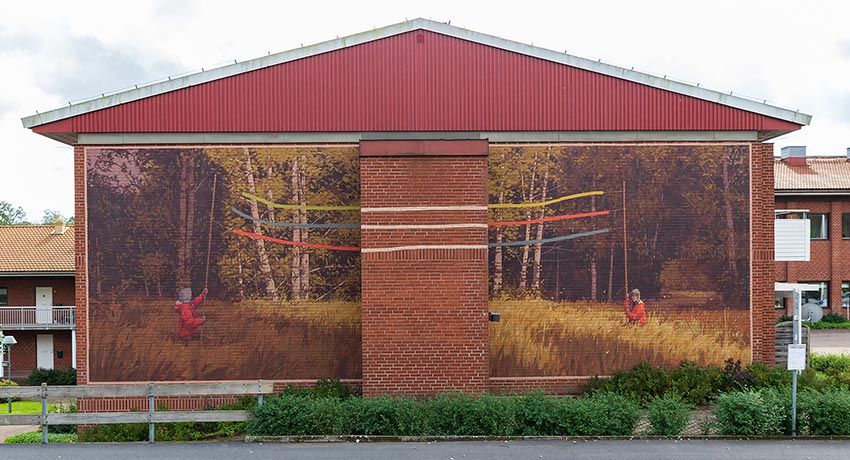 Along national road 25, on the brick façade of Ljungblomman’s senior apartments in Simlångsdalen, you will find a mural by American artist Pat Perry. The painting depicts two people holding up a banner in a forest glade. The subject is split across the two façades and the painting is bound together by their banner.

The artwork has a strong connection to the town and those who live there. Pat Perry

External link, opens in new window. is interested in questions that delve into the relationships people have with their towns. During his time in Simlångsdalen he met with both the village’s oldest inhabitants and children from Brearedsskolan. He says that he has found a lot of artistic inspiration in the stories and tales he has heard from those who live there, and he expresses great respect for Simlångsdalen and its inhabitants.

This page just contains a few select murals. You can view more works at halmstad.se (Swe)

Share
The page was last updated: 2 May 2022
Send us your comments